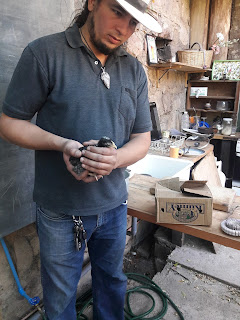 After almost two months of summer work, we finally concluded the chicken pen "gallinero".  This project may seem not so important and fundamental to the overall view of Patio Barón -apparently-, but the truth is that this little project is an old dream come true...

Many years I´ve been asking folks in the country side, if having chickens was really a hard thing to do, you know: all the worries, the attention, the food, the diseases, the number of wild animals that can kill your gallinas: the dogs, the cats, the rats, the black haired foxes...  The opinions were divided and for more than 4 years I was expecting that drop that could force & inspire the beginning.

The first attempt was made some weeks before. I bought an adult rooster and 3 little chickens (of 2 weeks of age), just to have a "free trial".  The result was a disaster.  The rooster was attacked by my dog, but survived by pretending sudden death.  When we tried to catch it -to cure it-, he decided to jump off the cliff... minutes later the wild dogs of the neighbour took it and killed it immediately.

"..so, no wake up call from our first rooster"

The other three littlies, well. After one week of fine existence with the rest of the animals. My dog attacked again, this time it was the turn of a little one.... the other two survived -traumatized- until now, only after a severe punishment to my dog.
The decision was clear, if more chickens were meant to arrive and live safely, we would need a new house for them.

After the disaster, we were 100% focused on making the pen unbreakable. 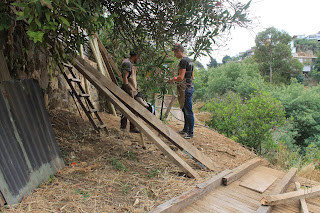 The task seemed easy, but there were a number of questions: How big? For how many chickens do we project the space? Should we have a special place for laying eggs?

Anyway we started doing the first pillars, me -Roc-, Troy -the Belgian prince-, and Ludwig -a French cooker-. The design should provide a principal space divided in two -at first-: the place for nests "ponedoras", and the place for the rest. 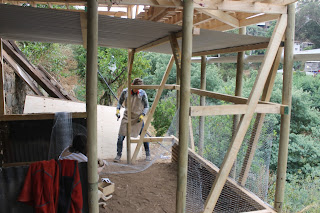 The first "room", was inagurated by an unexpected recall: there was a friend of a friend that had his little family of chickens but he found a new job and had no time to take care of them. So he decided to sell the whole pack, at a very convenient price...woooooooaaaa!!!
The good news was an extra motivation to everyone. That day we worked until 10 pm to finish the first "room", and so we did it!.

Happy, happy, happy. The first stage was finished, with 5 gallinas, one rooster, ten little ones, and a prospective of 10 eggs to be born. 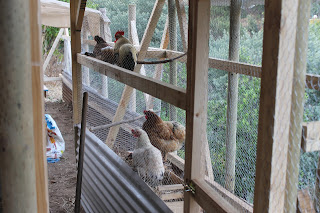 But if you want egg production, 5 gallinas won't help you so much. After a short research on youtube, we found out, that  50 gallinas, was a good number to start with a family that can grow, and produce the basics; meat & eggs. 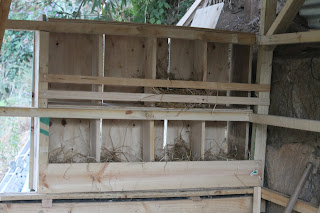 The second stage was to upgrade the pen with a larger area where everybody could "feel free". In the meanwhile, I travelled to the countryside, and bought 25 more gallinas. With this amount plus, the little ones, now we have almost 50 gallinas, which is the basics to start off.

Thanks to all people that helped to do this nice project. We will sure put your names folks, in each egg we eat at breakfast....

Thanks to: Troy, Sam, Ludwig, Mariella.


PD: You can see the TIme Laps here!